“Music — like poetry and art — can’t be stagnant, you’ve got to get out there and meet people, live a little. See things through other peoples eyes. I think it’s called having empathy. The world could use a lot of that right now.” — TU

Templeton Universe is an indie alternative/rock band — from the Karoo (South Africa) — hell-bent on sharing their truth and cosmic perspective about this 3rd Rock from the Sun.

inspiration from traveling and dipping his big toe into culture and alternative perspectives. He is a truth-seeker — which means he’s on a path of universal/consciousness/wake-the-fuck-up/spiritual discovery; uncovering lies; speaking his truth and sharing his perspective of this whole messy business called life.

This singer/songwriter/musician/producer has been performing and recording since the early 90’s and has slowly built up a listener base of like minded people who crave organic, authentic music. 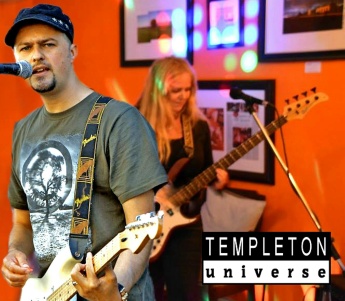 The best way to describe the Templeton Universe frequency would be to take the following ingredients:

Distill the carefully constructed sounds of Zero 7, add the intensity of Radiohead with a dash of raunchy Muse, mix this with the mournful twang of Rufus Wainwright — not forgetting the innocence of Elliott Smith — and you’ll have an idea of the Templeton Universe sound.

Cherie Roe Dirksen just joined Templeton’s band as the new bass guitarist in 2017. This officially made Templeton change the name of this musical outfit to ‘Templeton Universe’ — which is why his previous 4 albums were under the name ‘Templeton’.

Cherie was also in the band ‘The Bends’ that recorded 2 studio albums in the late 90’s.  She occassionally plays some cover music with Templeton as mc². She brought out a mellow, mood music CD called, ‘Nature Calling’…you can READ MORE about that HERE (which Templeton produced). 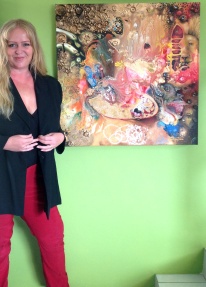 Apart from being a musician, she is also a self-empowerment author, radio presenter (for Big Indie Giant radio) and a columnist. She has written for publications such as Odyssey magazine SA (alongside the likes of Paulo Coehlo!) and Collective Evolution. She currently writes for Conscious Life News (USA). She’s written a few books too — check them out HERE.

She’s also pretty good with a paintbrush — check out her art page at Saatchi or on facebook.

You can meet her and see more of what she’s about at her own official site HERE.